Since the publication of its first edition in 2008, the Global Report on Local Democracy and Decentralization (GOLD) has become an international benchmark in the analysis of local and regional governments worldwide. The fourth edition, GOLD IV, examines the challenges and issues that local and regional governments face in our current urban age through three main chapters on metropolitan areas, intermediary cities, and territories (including regions, small towns and rural municipalities) as well as the solutions that can be devised to co create the sustainable, inclusive, safe, and resilient cities of the future, as advocated in Goal 11 of the SDGs.

GOLD IV studies the role that local and regional governments can play within the emerging new global consensus. Through key international agreements such as the 2030 Agenda, the Paris Agreement on Climate and the New Urban Agenda, the international community has finally committed to leave ineffective, exclusionary and unsustainable development models behind. Against this backdrop, local and regional governments can be empowered to catalyze an inclusive process that is consistent with principles of local democracy and the Right to the City to co-create the future of our cities and territories. For this purpose, GOLD IV presents the foundations of the Global Agenda of Local and Regional Governments for the coming decade; a set of policy recommendations for all actors and stakeholders in the local and regional governance system. This agenda for metropolises, cities and territories is UCLG’s legacy and contribution to the global debate – as embodied by Habitat III, the 2016 UN Conference on Human Settlements – and an invitation to take the next step and foster a truly global and inclusive alliance for our urban future. 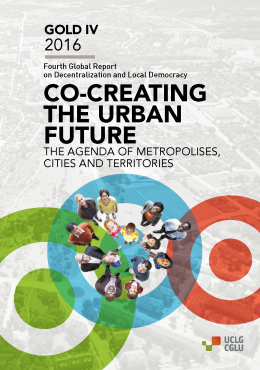